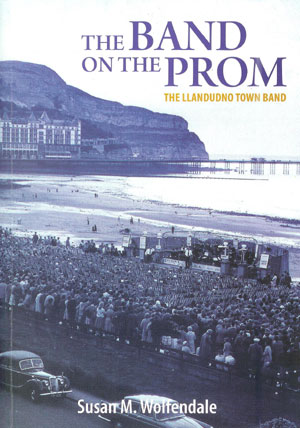 Fans of brass bands and local historians alike will love this new book detailing the history of the Llandudno Town Band. From doubtful beginnings in 1910 to centenary celebrations in 2010, through crises and controversies both musical and financial, the Band has been an important part of the history of the ‘Queen of Welsh Resorts’.

“It is 1910, and Llandudno, the most fashionable seaside resort in Wales, has a problem: the Town Band is not providing entertainment to the standard expected by its discerning visitors.

The Bandmaster can’t make ends meet, but the Council won’t allow him any more money. No one else is volunteering for the job, except the local brass band…

This is the story of how the St Tudno Silver Band came to an arrangement with the Llandudno Urban District Council; of its extraordinary bandmasters, who took on the challenge of providing music whenever the town required it; of the phenomenal success of the nightly shows on the promenade bandstand, that brought visitors flocking back to the resort year after year.

It is also the story of the working men – joiners, plumbers, engineers – who dedicated decades of their leisure time to playing the iconic ‘tiddly-om-pom-pom’ on the promenade.

The history of the Llandudno Town Band’s first 100 years is told though unprecedented access to the Band’s archives and reveals the previously hidden story of the amateur musicians who became the very public face of Llandudno.”

‘The Band on the Prom’ contains over 90 illustrations and a huge amount of information that has never been published before. The many anecdotes reveal the Band’s involvement in both local and national events and give a behind-the-scenes insight into the continuing efforts to entertain visitors to the town.